What Is The Karen Generation? 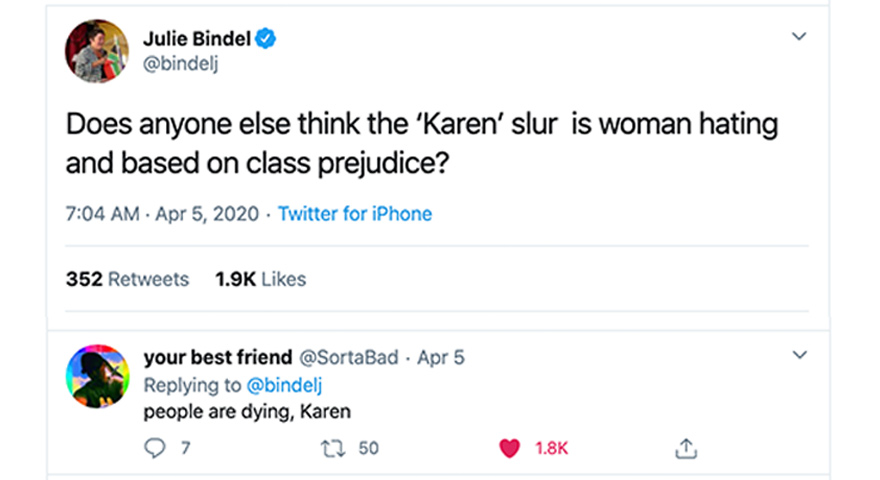 The Brief: On Twitter, people are debating whether the "Karen" stereotype of a white woman who's always demanding to "speak to the manager" is a "slur" or not.

On April 5, 2020, discourse began on Twitter as to whether or not the Karen stereotype is a slur. This first started when writer Julie Bindel tweeted “Does anyone else think the ‘Karen’ slur is woman hating and based on class prejudice?” The “Friends Of Journalism” Twitter account took this idea a step further, calling Karen a “sexist and racist slur” and “an equivalent of the n-word for white women,” asking people to vote to show whether or not they agree with this statement.

“Friends of Journalism” or @journalistsew has no official associations with any journalistic organizations and appears to be an ironic troll account that mocks liberal ideologies.

Does anyone else think the ‘Karen’ slur is woman hating and based on class prejudice?

The term "Karen" is being used as a sexist and racist slur. Considering this is an equivalent of the n-word for white women, should it be banned on Twitter?

The main consensus as to whether “Karen” is an offensive racial slur is that no, it is not. While it is a negative stereotype about white, middle class, 40+ women, it is generally used to call out the harmful behavior perpetrated by members of these groups. Many people use the argument that reverse racism is a myth to point out the impossibility of there being an N-word equivalent for white women.

Although much of the conversation around this topic is made in jest, there are some serious debates occurring online about the validity of the idea that “Karen” is a slur.

“Karen” was a term created *specifically by Black women* to talk about white women’s interpersonal + state violence against us and our communities: calling the police on us for getting coffee, threatening to have us fired, talking down to us at work (where we’re now “essential”).

If it’s comparable. Write the whole word out and not just “N Word” just like you did Karen. Just write it. I’ll write it with you. pic.twitter.com/6QaKPrlZGZ

HERES NO SUCH THING AS REVERSE RACISM

As the kid of immigrants, the "Karen is a racial slur" business is hilarious.

My mom named me Karen (and gave my siblings' American names) partially bc she wanted us "to fit in" in white society.

She knew back in '86 that being a "Karen" would give me a sort of privilege.

Many Karen memes and jokes reference the racism and microaggressions against people of color and Black folks in particular. The phrase “the K word” has been used to highlight the absurdity of the idea that “Karen” could be a racial slur.

we are the daughters of the karens you couldn’t burn

I hear Quentin Tarantino uses Karen 324 times in his next movie.

But as soon as I, a Black person, want to say it, all of a sudden, I'M racist!

Personally, I believe NO ONE should be using the K-word…but that's just me

what's the "we shall overcome" of karens? shake it off???

Next up: What Is the #LockdownEffect?