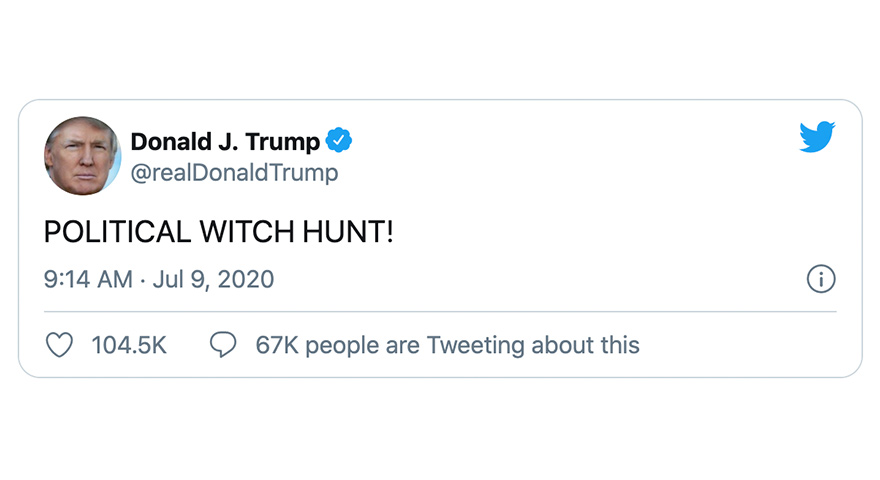 The Brief: In an interview, Trump said of the Coronavirus deaths in the United States "it is what it is," sparking backlash, criticism, and memes.

Trump’s comment on Coronavirus deaths that “it is what it is” led to memes denouncing the flippancy of his statement and stressing the devastation of the COVID-19 pandemic in the United States. In an “Axios on HBO” interview with Jonathan Swan that aired on August 3, Trump made a number of questionable statements including saying that he wished alleged child sex trafficker Ghislaine Maxwell “well” and downplaying the Coronavirus outbreak in the U.S.

TRUMP on 1,000 Americans dying from coronavirus each day:

“It is what it is.”pic.twitter.com/dgzc1s7Ptt

Many people responded to Trump’s interview with criticism and memes. In particular, the phrase “it is what it is” stuck and the hashtag #ItIsWhatItIs was trending on Twitter on August 4. One popular meme format to emerge from the interview features Jonathan Swan’s bewildered and frustrated facial expressions from when Trump made outrageous comments and disputed documented facts.

All the best reactions of @jonathanvswan as he listened to @realDonaldTrump's responses. Which is your favorite? @axios #ItIsWhatItIs pic.twitter.com/TWL5bOvESX

Apparently “it is what it is” is one of Trump’s go-to ways of characterizing Coronavirus deaths.

Trump’s comments were reminiscent of Vanessa Hudgens’ “yeah people are gonna die which is terrible…but like inevitable?” Instagram Live debacle.

"It Is What It Is" is the second coat from Zara's fall Indifference collection, available exclusively at Walmart. #itiswhatitis #COVID19 #TrumpLiesAmericansDie #FLOTUS #Indifference @axios @jonathanvswan @realDonaldTrump pic.twitter.com/hgnucWZB3b

Reporter: Well, what about the over 150,000 Americans who have died?@realDonaldTrump: It is what it is. pic.twitter.com/IMQhrfO5cY

[Doctor diagnosing you with terminal cancer]

It is what it is.

“It is what it is” signs up in Brooklyn. pic.twitter.com/tvvdrPrrhq

I don’t know who needs to hear this but if your response to over 150,000 people dying is “it is what is” then you’re not only a sociopath but you’re also probably a serial killer

Trump on Kristen Stewart: SHE CHEATED ON ROBERT LIKE A DOG! HE SHOULD NEVER TAKE HER BACK!

Trump on Ghislaine Maxwell: “I wish her well.”

Trump shows more concern for an accused child trafficker and alleged rapist than the 159,016 Americans who have lost their lives to Covid-19.

The #COVID19 epidemic in America is as well controlled as this was 👇#ItIsWhatItIs pic.twitter.com/pcyjZ466oI

Is #itiswhatitis trending yet? Cause it should be. pic.twitter.com/pfqaA1kFFr

My four year old could make a better graph than this ! #itiswhatitis #trumpvirus @realDonaldTrump pic.twitter.com/EkQSlbiwQ8