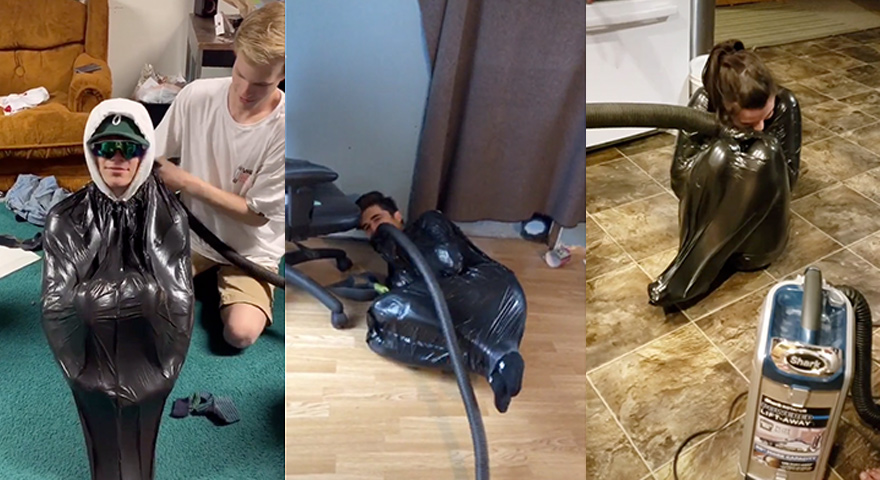 The Scoop On The Vacuum Challenge: Should You Be Concerned?

The Brief: Across the globe, people are participating in the "vacuum challenge," which involves vacuum sealing oneself in a plastic bag.

Videos have been posted online in countries including India, the UK, the United States, and Russia. On Instagram, the hashtag #VacuumChallenge only yields 319 posts, but on TikTok, the same hashtag has received just over a million views. It seems that the vacuum challenge is more prominent online than the Shell-On Challenge was but less widespread than some sensational headlines suggest.

The most cited source of risk of the vacuum challenge is that it could decrease the flow of oxygen to the brain and cause what’s known as cerebral hypoxia. While this risk shouldn’t be ignored entirely, and anyone attempting this challenge should certainly do so under close supervision, there have been no known reported injuries related to the vacuum challenge. In most videos, the bag is only tightly sealed around someone’s body for a few seconds. Almost all vacuum challenge videos show people placing their bodies in bags from the neck down. Anyone considering covering their head with a plastic bag should obviously not do that.

Another potential danger is that someone could fall over and hurt themselves when the vacuum seal makes it so they can’t move their limbs. This is another great reason not to try the vacuum challenge unattended.

A few videos posted online show parents sucking the air out of garbage bags which contain their terrified-looking children. While trying this strange activity may be fun for adults and older kids, it certainly shouldn’t be imposed on younger children who may be scared and not know what’s going on.

Ultimately, the vacuum challenge is about as dangerous as it appears to be. It’s not a great idea and could definitely lead to some discomfort We don’t recommend that you try this challenge, and it wouldn’t hurt to give your kids the same advice, but overall it doesn’t pose a major threat to society.

Luckily, laughing at videos of other people participating in the challenge won’t hurt anyone.


we decided to do the “#Vacuumchallenge” thing or whatever it’s called 🤣 this was the outcome. my kid is so freaking funny. pic.twitter.com/hF99MPk5uG

Next up: God Save the Meme: The Trumps' Visit to the UK

God Save the Meme: The Trumps' Visit to the UK