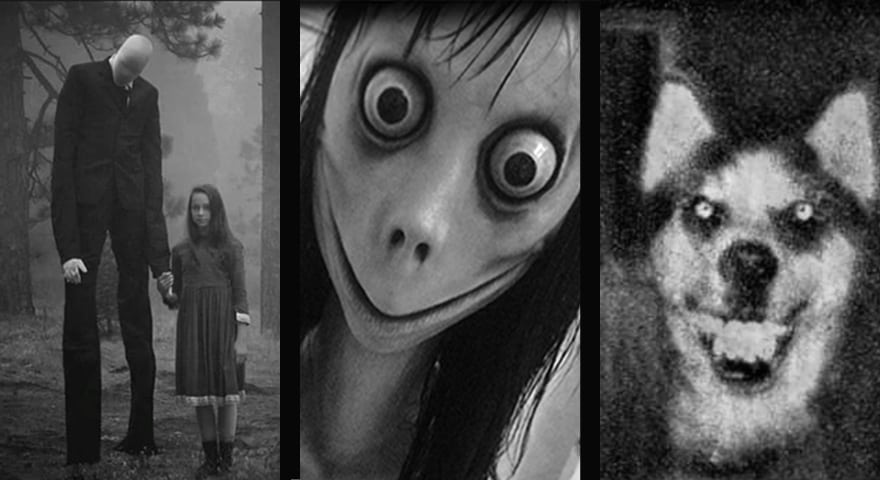 The Dangerous Stories of Creepypasta, Momo, and Blue Whale

The Brief: Creepypasta is a genre of online horror stories that are passed around. Although they are fictional, some cases have been reported of children and teens acting on behalf of online "spirits," even inciting suicide and attempted murder. Here is StayHipp's guide to separating fact from fiction and helping your children safely navigate the internet.

For information about the resurgence of concerns surrounding the Momo Challenge in February 2019, check out our coverage here.

Creepypasta is a horror story that is spread online. The name originated as a spinoff of “copypasta,” a term used to characterize chain letter-like information that is passed around online, often through copy and pasting. Creepypasta can include urban myths, conspiracy theories, and spooky fiction, but it is usually shared as if it were true.

Popular sources of Creepypasta content include Reddit, Amino, YouTube, and multiple websites dedicated to the genre. Many Creepypasta stories are relatively niche content read by fans who enjoy the way it blurs horror fiction and reality. However, some Creepypasta stories have entered the mainstream, inspiring video games, deep conspiracy theories, and more sinister, violent acts.

Since Creepypasta is continuously copy/pasted and retold with different variations, it can be impossible to identify original lore or authors. Slenderman, Smile Dog, Momo, and Blue Whale are copypasta legends, some of which have more sinister histories. What they have in common is that they spread online where they are passed along both as fact and fiction.

The Slender Man is the creepy figure of a tall or slender man. After this figure was fabricated on a comedy website in 2009, the sinister meme circulated on 4Chan and made it to Copypasta forums as a popular horror urban legend. In 2012 Mark J. Hadley designed an indie click-through survival horror game called Slender: The Eight Pages. In 2014, two twelve-year-old girls stabbed their classmate “in an attempt to sacrifice her body to Slender Man.”

This is a story of an image of a smiling dog that, when seen causes insanity and death. Pictures of an eerily smiling husky represent the “smile dog,” but according to the mythos, the “original image” (which would cause insanity and death) only exists on a floppy disc.

Momo or “Momo the WhatsApp Girl” started as a viral, creepy image. The image itself comes from an art installation made by the Japanese special effects company Link Factory. After this image began to spread online due to its creepiness, an urban legend began to spread as well, mostly in Spanish speaking countries. The image became associated with several phone numbers linked to Whatsapp accounts. Some forums and social media users  “challenged” people to message the number, and to play a “game” related to the chilling image and a supposed backstory about a “girl named Momo.

Some people have reported that after contacting these numbers, they received dark, disturbing messages which threatened them and their families, urged them to self harm, and/or commit suicide. Although it is difficult to determine how many of these stories are true, multiple reports have been made of minors in South America committing suicide after partaking in this “game.” Police in South America and around the world have been urging parents to make sure that children do not reach out to any phone numbers claiming to be “Momo” or relating to the “challenge.” They also warn that messages under the guise of a “Momo” character could be used to extort children for personal and financial information.

Somewhat similar to the “Momo Game,” the “Blue Whale Challenge” was a widespread horror story linked to teen suicides. This “challenge” consisted of someone messaging children instructions for 50 days of activities, including self harm. The challenge then culminated in suicide. Many teen suicides in Russia were reportedly linked to this challenge, but it is unclear exactly how many were encouraged by this, and to what degree it influenced their actions. In 2017, a Russian man named Philipp Budeikin pleaded guilty to inciting the suicides of 16 underage girls by messaging them as part of a “Blue Whale Game.”

Even when dealing with police reports and news stories, these stories can be convoluted and muddled, especially because teen suicide is a sensitive, pressing issue that is not easy to understand.

First and foremost, suicide prevention resources include the following:

In addition to taking action to prevent suicide, steps can be taken to ensure that your children are not fooled or scared by urban legends, fake news, Creepypasta, or conspiracy theories. It is key to avoid sensationalism and to separate fact from fiction. Stress that the deaths related to these scary stories and memes are cases of people being manipulated by fear and bad people, not by supernatural elements. Debunking and unpacking these stories as false can be an important step to understanding that they are not “real.” There are many resources online that debunk fake news, conspiracy theories, and “true” horror stories. Some are more factual while others may perpetuate the stories.

While horror movies, stories, and games can be entertaining for many people, it is important to set boundaries with your children about what kind of content they are allowed to watch, and what is real. If you find your children being scared by what they read and see online, make sure that they report any real dangers, and that they understand that horror fiction, although it may be terrifying, is not real.

Having open and honest dialogues about what your children do online and how it affects their mental health is the best way to ensure safe, positive internet usage.