What Is A Moan Room On Clubhouse? What Is Clubhouse, The Invite-Only App?
News 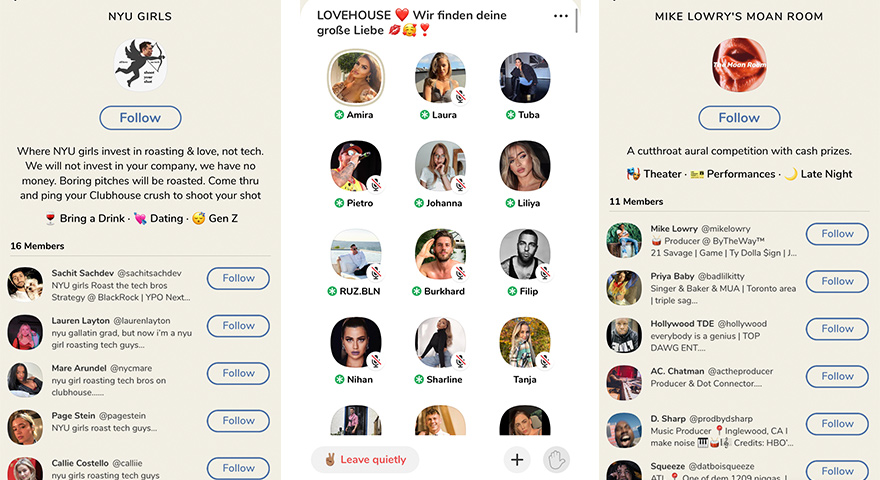 How People Are Using Clubhouse For Dating

The Brief: As new users flock to Clubhouse, some are finding romantic connections and flirtatious encounters on the app as one of the many forms of socializing it hosts.

In addition to traditional dating apps, people have been known to meet dates and romantic partners on social media platforms like Tumblr, TikTok, Instagram, and Twitter. Clubhouse, the invite-only audio social media app with a fast growing user base is following suit as people are flirting, speed dating, and seeking advice from matchmakers on the platform.

While the pandemic may have killed the in-person “meet cute,” some people are reportedly meeting romantic interests on Clubhouse and then striking up relationships in social media DM’s and eventually even IRL. While Clubhouse doesn’t have an in-app DM feature, it’s common practice for people to reach out via Instagram or Twitter through links in their bios.

I met my new (romantic) partner in #clubhouse. Here's our story including what I've learned from being open and available to receiving love in the most unlikely online space.

Clubhouse combines a sense of openness and exclusivity for networking that, for many, translates to more romantic connections as well. There are rooms and clubs on the platform dedicated to discussions on dating, love, sex, and relationships that double as places for single people to gather.

The group “dating after pandemic,” for example, has over 6,400 followers. Social clubs centered around shared interests sometimes host speed dating rooms for people in these groups to meet and potentially build romantic connections. Other love-focused rooms and clubs mimic popular dating shows and challenges like The Bachelor, Love Is Blind, etc.

In addition to more traditional speed-dating rooms, “shoot your shot rooms” on Clubhouse provide public forums where people compete to see who has the most alluring flirting skills. In these rooms, speakers attempt to gain the attention of others, trying to finesse a romantic or platonic connection, all while in front of an audience. The group “Shoot your shot: nyu girls roasting tech guys” has received much media attention, but this was predated by Black and POC-led rooms like #CuffHouse, some of which have allegedly faced suspension on the app.

For everyone in the shoot your shot room yesterday, I’d just like to update you with this 🥺 pic.twitter.com/otiFW5kxFE

Along with other professionals and influencers, many matchmakers are using Clubhouse to share their expertise and to promote their brands. Matchmakers may host rooms and clubs for singles to congregate and mingle. High-profile matchmakers like Carmelia Ray and Bonnie Watson dispense advice on the app and build community for their thousands of followers.

While they’re not necessarily for “dating,” moan rooms where people compete to see who can make the most impressive NSFW moaning sounds can facilitate flirtatious exchanges as people gather around a steamy subject. Other lighthearted rooms dedicated to risqué topics on the app include NSFW comedy and playful discussions about sex.

The formation of romantic connections on Clubhouse highlights how this audio-only platform is facilitating interactions that may feel more spontaneous, personal, or refreshing than those on traditional image, text, and video-based apps.

Next up: What Does Valid Mean In Slang?

What Does Valid Mean In Slang?