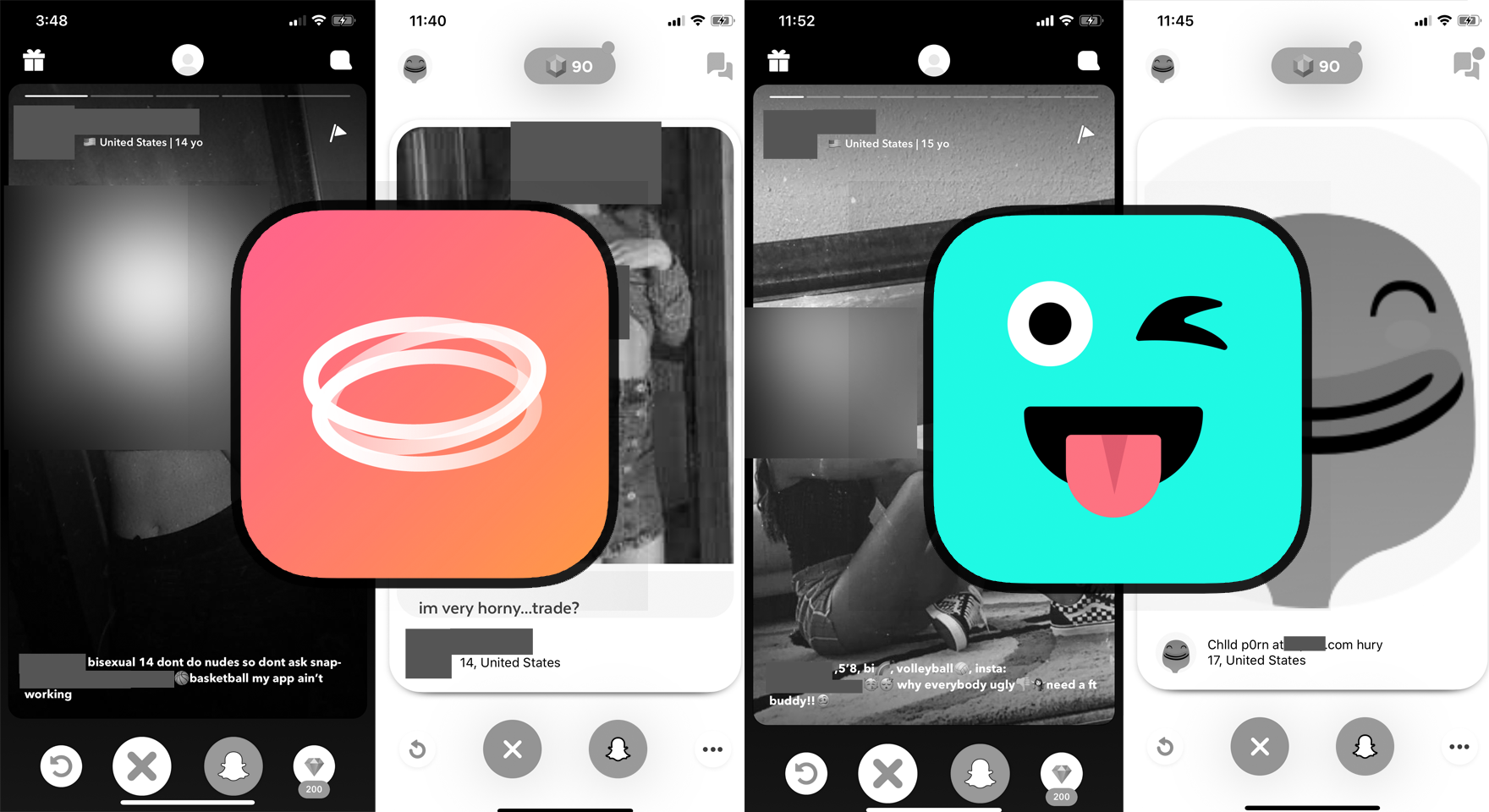 The Brief: Social media apps Hoop and Wink allow users to swipe through Tinder-like interfaces that connect to their Snapchat profiles. According to Sensor Tower, Hoop and Wink collectively have over 1.7 million downloads. As they're particularly popular among minors and have bypassable safety enforcement, these apps potentially pose risks including sexual predation, exploitation, and child pornography.

Two near-identical social media applications Hoop and Wink encourage users to add strangers on Snapchat. Signs of predatory behavior including solicitations for minors to trade nude photos have been found on this app.  The age restrictions on these apps allow users as young as 13, but this rule can be circumvented if users can simply lie about their age.

“If you’re a 46 year old and trying match with a 13 year old, or if you’re searching for ‘premium snapchat’ accounts, then this is the app for you.” – Wink review from DeathByCoconut in Jan. 2020 on Apple’s App Store

Issues of online sexual abuse and child exploitation are widespread on many social media platforms. From video games to anonymous forums to TikTok, there are serious risks that come with interacting with strangers online. Hoop and Wink pose unique risks due to the fact that regulations in place can be bypassed that the apps are designed in a way that allows teenagers to treat them like dating apps, which can provide room for grooming, catfishing, sextortion, and other nefarious behaviors.

Hoop and Wink are free to download and connect to Snapchat as part of the Snap Kit collection of apps. Users can swipe through profiles of others on the app with the option to request to be added to their Snapchat friends list. At the time of writing, Hoop is ranked as the #6 social media app in Apple’s App Store with 4.5/5 stars from over 248,000 ratings and Wink is ranked as the #11 social media app with an average of 4.5/5 stars from over 116,000 ratings.

Users can choose to view profiles from around the world or only in their home country, but there is no option for location-based pairings. In order to request to add someone on Snapchat, users must use virtual “diamonds” or “gems,” of which they are given a limited supply. More can be acquired by sharing the app with others, watching ads, taking surveys, or purchasing products from brand partners. When two users match, the apps connect them privately and directly on Snapchat.

Although both Hoop and Wink advertise themselves as ways to “make new friends on Snapchat,” evidence shows that many people, including many minors, may be using it as a de facto dating and sexting app. The apps also appear to market and cater to minors as they are dating app-like platforms that allow users under the age of 18. They are currently being used by minors who often publicly share information including age, personal photos, full names, location, and personal information such as sexual orientation and relationship statuses.

The following photos were found on February 5th and 6th by Hoop and Wink users who used various age settings. All photos have been edited or cropped to remove identifying information and censor nudity.

From Hoop. Listed as 14. Includes the school that she currently attends, home state,  sexual orientation, and Snapchat username. “Don’t do nudes” implies that they’ve been asked before. Revealing photo. From Wink. Listed as 14. Photo contains nudity and may be sourced from the web. “Im very horny…trade?” Implies sexual interest and solicits exchange of nude photos.

From Wink. Listed as 13. Includes explicit mentions of incest.

From Hoop. Listed as 13. Directly states that they’re actually 12, not 13, and lying about their age. Lists relationship status and sexual orientation with personally-identifying photos.

From Hoop. Listed as 16. Includes full name, home state, height, and relationship status. “DO NOT ADD ME FOR NUDES!!!” implies that such requests have occurred before.

From Hoop. Listed as 13. Lists home state and Snapchat username. “HMU to trade” is a direct ask to trade nudes.

From Hoop. Listed as 14. Includes name of city and state and last name. “Send memes not nudes” implies that such requests have been made in the past. “If you’re a 46 year old and trying match with a 13 year old, or if you’re searching for ‘premium snapchat’ accounts, then this is the app for you.” “Can’t say how many inappropriate things I’ve seen on this app, I mean it’s a cool idea, but there are people who are ’13’ and doin nasty stuff and you actively see naked people, so I think the app needs a lot of work, but this app other than the bad stuff is pretty good” “I’m upset by the fact there is no customer support Email or phone, there is no report button for people you’ve already given your snap to, I have been stalked by a 24yr old who’s pretending to be 13 on this app the report button would go a long way for this app” -Hoop review by depressionKuzee from Feb. 4, 2020 “My younger sister (13) showed me this app. Me being an adult I downloaded it to see what it’s about and it’s basically the childish version of tinder. I don’t things kids should be aloud to use this app and yes I’m aware they could fake their age but still. They age they put on is 12+ and it’s ridiculous. And before you think “ok boomer” to this I was just swiping through and a bunch of the people on here are looking for ‘a wifey’, hook ups, and people to sext with; I guess you can say it’s appropriate at my age but regardless younger kids shouldn’t be on this app.”

According to Hoop and Wink, users between ages 13 and 17 are not allowed to use the app or create an account without the permission of a legal representative. However, at the time of writing, there are no measures in place that actually require users to verify their age beyond selecting one from a list. There is no requirement that users under age 18 show proof of parental permission.

StayHipp reached out to the Wink team who stated that “Adults can’t see profiles of any user under 18, and vice versa,” but when upon downloading the app, the StayHipp team found no barriers to prevent users from selecting any age and changing it at any time.

Users can change their “age” at any time, providing room for people to abuse this feature and pose as different ages than they really are. The app matches users up with others who are close to them in age. Since there is no age verification process, an older user could easily target teenagers by setting their profile to a young age.

Neither Hoop nor Wink are listed as dating apps, but their swipe-through features closely resemble apps like Tinder. Based on user profiles, many people, including those under 18 appear to be treating Hoop and Wink like dating apps. Numerous profiles include sexually suggestive or even explicit photos, relationship statuses, sexual orientations, and comments about what people looking for such as a FT buddy, boyfriend, girlfriend, or someone to start a Snapchat Streak with.

Profiles often include links to other social media profiles and even the occasional phone number. On App Store reviews, there have been reports of people who appear to be under the age of 18 advertising to sell nude photos of themselves. Many profiles explicitly state “no nudes,” thus implying that the sharing of nudes between people of various ages is a norm on these platforms.

In an interview with the Hoop team conducted over email, they stated “We have developed technical tools that filter and flag inappropriate content before it is posted. When inappropriate content is not filtered and flagged by our tools, our community or our moderators quickly report it and it is removed from our platform. We adapt and improve our tools regularly.” They also cited safety and privacy features including blocking, reporting, and the option to not publicly show one’s age.

According to Wink, the app uses a “24/7 moderation team, and we currently use AI technology to review photos before they appear on the app.” The app’s Terms of Service prohibit the distribution of “content depicting child exploitation” and asks that suspected violations be reported to Wink at [email protected] Wink’s Community Guidelines officially prohibit the sharing of sexually explicit content.

In an email, the Hoop Team wrote that “Safety is very important to us. Like in the real life, people are exposed to risks online so, beside complying with the developers platforms’ safety requirements, we develop our own tools to make Hoop a safe, fun and friendly platform.” [sic] Wink’s statement said “We are constantly working on ways to improve user safety and will continually be assessing both technological and human means to continue to promote a healthy user experience.”

On various social media apps including Hoop and Wink, risks of interaction with strangers include sextortion, abuse, doxing, bullying, sexual predation, child grooming, and more. Between October 2016 and April 2016, the National Center For Missing And Exploited Children received 1,428 reports of sextortion of minors on their CyberTipline.

Although the onus should not be put on potential victims, with limited existing precautions and safety measures, there are certain steps that users and parents can take to help ensure safer online experiences. Due to their issues with age verification and sexually explicit content, we don’t recommend that anyone use either of these apps.

For those who still plan on using these apps or for parents with children who may be using Hoop, Wink, and other similar apps, certain measures can be taken to protect one’s safety and privacy. For parents, it’s important to facilitate open conversations about internet use and to encourage their children to report any online abuse or misbehavior. In addition, it’s never advisable to send personal or sensitive information, videos, or photos to strangers, especially not content that is sexually explicit.

In order to prevent children from downloading apps and accessing content meant for adults only, parental controls can be implemented on iPhones and Androids. Instructions for Apple iOS devices can be found here and ones for Androids can be found here.

For more information on how to deal with sexually explicit photos spreading online and issues of online predation of minors, visit the National Center for Missing and Exploited Children’s website.

If you or someone you know is experiencing online sexual abuse, exploitation, or extortion, or may be a victim of predation, help can be found at National Center for Missing and Exploited Children’s website or 1-800-THE-LOST (1-800-843-5678).