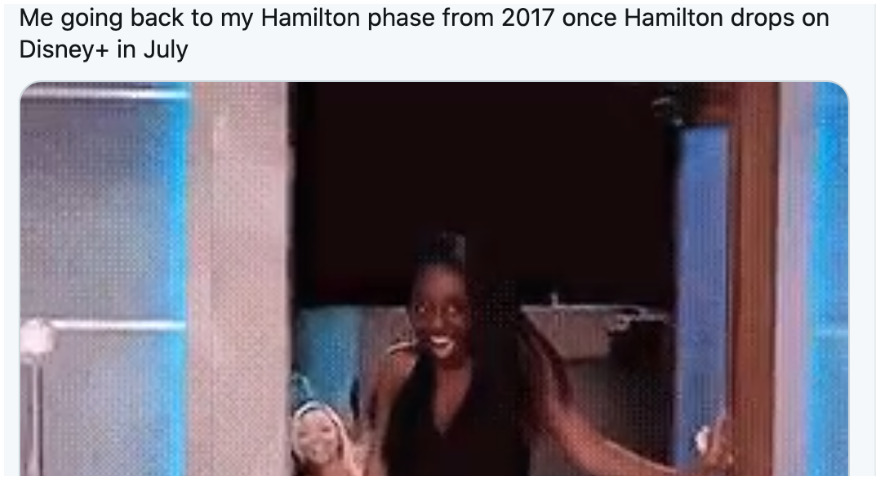 The Brief: Hamilton Phase memes appeared on Twitter after Disney+ announced Hamilton movie will begin streaming on the platform on July 3.

On May 12, streaming service Disney+ announced a film version of the critically acclaimed and always sold-out Broadway show Hamilton, would be available to stream on the platform as of July 3.

It’s only a matter of time…

Hamilton fans are known to be obsessed with Lin-Manuel Miranda’s telling of the story of America’s Founding Father Alexander Hamilton which incorporated classical music, hip-hop, R&B, pop, and soul.

i just realized that the July 3 release date of #Hamilfilm is right on time for America’s birfday and honestly: nice touch pic.twitter.com/iCTW2UUc97

My Hamilton phase from 2015 coming back after they release the #Hamilfilm:

me realising me also realising
the hamilton that i’ll probably
film comes be going back into
out july 3rd my hamilton phase pic.twitter.com/KBNIzDXUD7

Me going back to my Hamilton phase from 2017 once Hamilton drops on Disney+ in July pic.twitter.com/m7GfycNdPc

What I’ll be doing every day between now and July 3rd. ⭐️ #Hamilton pic.twitter.com/mjmzdHEgiC

No one:
Absolutely no one:
My Hamilton phase from long ago: pic.twitter.com/DN8Eaw6yP7

me: i’m done with my hamilton phase

king george iii: you’ll be back

the way the hamilton movie is gonna pull me right back into my hamilton phase,, humiliating pic.twitter.com/ueMp3e9oo8

Ima just walk around like this all day whispering "Ham" to myself#Hamilfilm pic.twitter.com/dCJD6Xyek6

My grandma in my messages: they’re adding Hamilton to Disney plus isn’t that amazing

Me, balls deep into my Hamilton phase having seen the show twice and went through a Hamilton rp war: pic.twitter.com/xVa9UTdgLd

#Hamilton I was starting to crawl out of my Ham phase and now I'm being dragged back in I am HOOTIN' AND HOLLERIN' NOW THERE AIN'T NO SHUTTIN' ME UP FROM SCREAMING THE LYRICS TO ''What'd I miss'' pic.twitter.com/gFNowbXgl1

my hamilton phase is coming back and the movie is NOT gonna help me pic.twitter.com/J8b5pZ6zbv

my hamilton phase in 2020 after the film announcement pic.twitter.com/P1rASmGiwh

Next up: Dog Parents Test TikTok's 'Don't Eat It Challenge