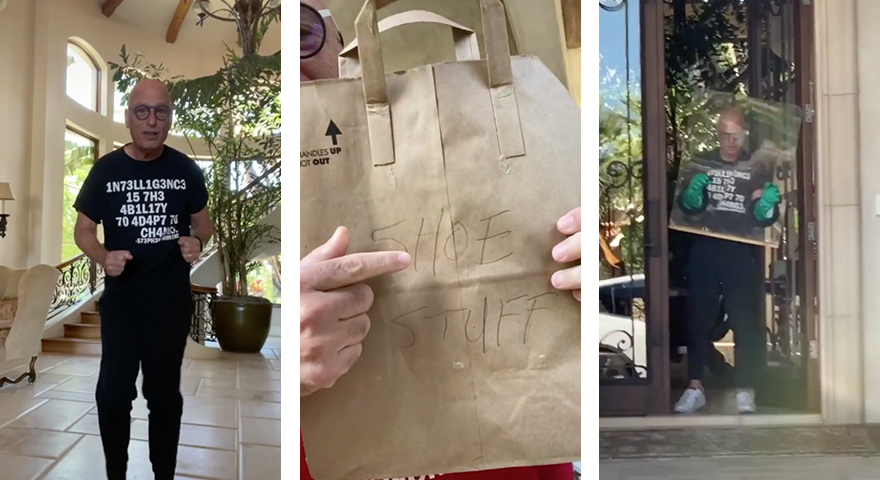 The Brief: Howie Mandel's most recent TikTok posts have troubled some fans who have developed conspiracy theories that he's being held captive. Howie has denied such rumors, but the #HelpHowie 'movement' continues to spread online.

Online, people are speculating that Howie Mandel is in need of help and is possibly being held captive. Howie has posted videos of himself safe in his own home, but fervent supporters of this conspiracy theory continue to claim that he’s unsafe, spreading the hashtag #HelpHowie. At the time of writing, videos associated with the “Help Howie” hashtag on TikTok have been viewed over 2.7 million times.

The #HelpHowie movement started after Howie Mandel posted some strange TikToks. The first video to arouse widespread suspicion was posted on July 3rd and featured him writing the words “shoe stuff” on a paper bag and explaining that this was an effective life hack for storing shoe-related items. Some people observed Howie briefly pointing to the letters SOS on the bag, theorizing that this was a coded cry for help.

Is Howie Mandel okay? Is this a secret message? Does he need help? pic.twitter.com/ji3rVFdu7C

Another TikTok that sparked concern featured Howie placing a message in a bottle and flushing it down the toilet. The video was fittingly set to “Message In A Bottle” by The Police. As lyrics in the song include “I send an SOS to the world,” some people have speculated that this video was Howie Mandel’s own “SOS to the world.”

One popular explanation for Howie’s strange behavior is that he’s been kidnapped and is being held captive. Others have speculated that Howie is having a mental health crisis that is causing him to post odd videos. A more likely theory is that Howie is an eccentric boomer celebrity with a TikTok account and that he’s toying with conspiracy theorists by creating videos that lend themselves to such interpretations.

After theories about Howie being in danger started erupting online, David Dobrik commented on a video where Howie appears to be stuck under two pillows “Howie i think your phones been hacked you’re sending me some scary stuff. Plz reach out to me or nat.” Dobrik then posted a TikTok in which he goes to Howie Mandel’s house to check on him. In the video, Mandel comes outside, holding up an anti-germ shield. He tells David “I’m 65! I’m on TikTok. That’s weird…I’m okay. Nobody’s holding me. I can go anywhere I want but I don’t want to be near anybody.”

Finally got to check on Howie!! Everything is all good @officialhowiemandel

While this video seems to clear everything up, some commenters suggested that David was Howie’s kidnapper and that Howie was still in danger. In an apparent attempt to demonstrate his safety and freedom, Howie posted another TikTok of him dancing, explaining that he’s ok, and noting that if he were being controlled by a kidnapper, that he wouldn’t be doing such random dance moves.

In spite of all this evidence, some conspiracy theorists continue to spread the idea that Howie Mandel is in need of help.

Ngl…. this is actually weirding we me out. 😫😳 Hope he’s just joking around but I seriously can’t tell… #helphowie #helphowiemandel #fyp #foryou

The #HelpHowie movement has been sensationalized, but many sentiments about it aren’t entirely serious. Like many other conspiracy theories, this one highlights strange coincidences but is based on an absurd and disproven concept. It’s possible that Howie Mandel (who is a comedian) is intentionally feeding the fire of this conspiracy, giving fans more strange content to unpack while verbally denying allegations that he’s been kidnapped.

If you’re looking for an effort to help a beloved celebrity that’s based on more substantiated claims, check out the #FreeBritney movement.

Next up: Star-Struck Emoji 🤩