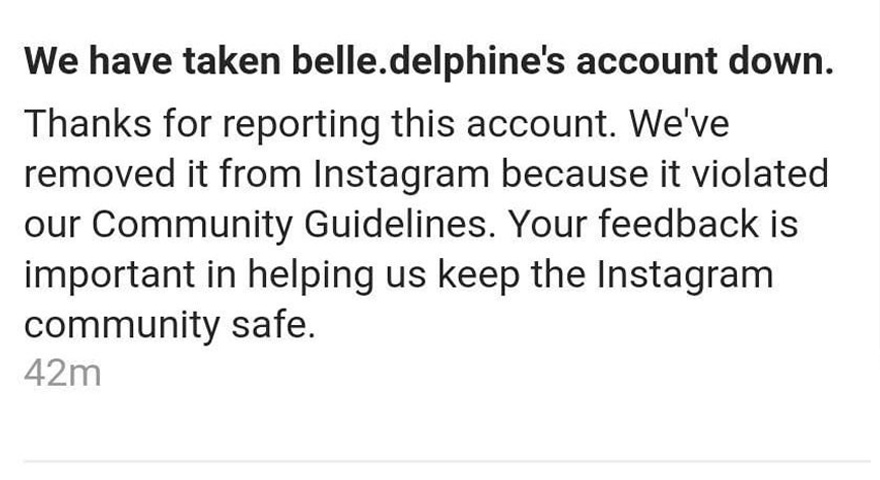 The Brief: NSFW model and influencer Belle Delphine has been banned from Instagram for "violating community guidelines" after a group of online vigilantes sought her downfall.

Belle Delphine’s Instagram is nowhere to be found. A search of the NSFW cosplayer’s username @belle.delphine yields only an error message that the page isn’t available.

Many people have expressed admiration for Delphine’s entrepreneurship and sense of humor. However, a vocal group of internet users, mostly boys and men, have been calling for her downfall and celebrating the apparent deletion of her Instagram account. Many posts on Reddit and other social media platforms suggest that a vigilante-style effort to report Delphine’s account for nudity and pornographic content had something to do with Instagram’s decision to remove her account.

On Reddit, multiple posts have been made in which people try to take credit for “getting Belle Delphine banned,” posting screenshots of their Instagram reports along with Instagram’s response that her account was taken down. According to such posts and related memes, efforts to report Delphine’s account were not really about wanting to uphold Instagram’s community guidelines, but rather to attack Delphine personally. The content on Delphine’s account often toed the line of what Instagram may consider to be appropriate but did not necessarily include clear-cut community guideline violations such as full nudity.  Instagram has a reputation for taking down accounts run by women and sex workers even when they do not violate community guidelines.

Me when Belle Delphine’s account gets taken down pic.twitter.com/gl9NJeQxJd

Meanwhile, Delphine has been Tweeting mysterious messages: images of numbers on black backgrounds released one-by-one in what appears to be a countdown.