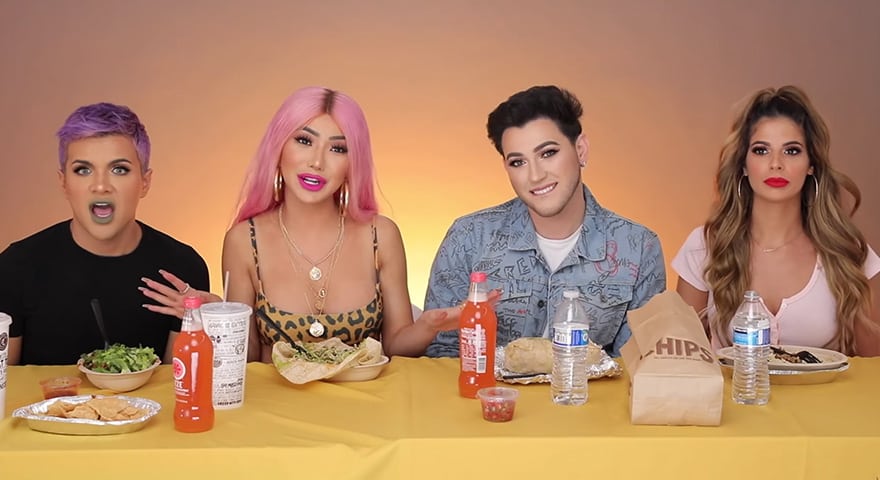 The Brief: A number of YouTube beauty bloggers have had their past racist Tweets and other questionable behavior brought the public's attention. For some vloggers, this has been detrimental to their careers, demonstrating how online footprints cannot be erased, especially in a world that is increasingly intolerant of bigotry.

Beauty vloggers notoriously love drama, throwing shade, and sipping tea. A recent bout of beef, which has been nicknamed “Dramageddon,” has left some vloggers with more than just their wigs snatched.

In order to discern what happened, we must dive deep into the world of Beauty “guru” internet drama. After the release of Shane Dawson’s YouTube documentary series “The Secret Life of Jeffree Star,” some of his rivals and ex-friends (of which he has many) have expressed their frustration that Jeffree Star has been portrayed so positively, in spite of his problematic, racist past.

Some of those individuals: Gabriel (Gabby) Zamora, Laura Lee, Manny MUA, and Nikita Dragun, posed for a Kardashian-inspired photo together in which they raised their middle fingers in the air. Although the picture was allegedly not taken with ill intent towards anyone, when Gabriel Zamora posted it to Twitter, he captioned it “B**ch is bitter because without him we’re doing better.” To those in the know, this was a clear reference to their ex-friend and collaborator Jeffree Star, with whom many of them have had beef. Zamora followed up the tweet with another one that read “Imagine stanning a racist? I could never.”

In response to these comments, Jeffree Star Stan Twitter dug up evidence of all four of the vloggers pictured being blatantly racist, and bigoted on Twitter and other social media platforms.

The reveal of this behavior went viral, even after the vloggers deleted the tweets. In a tradition of YouTubers apologizing for their bad behavior, the vloggers each made apology videos and/or tweets. However, they were not all well received.

Gabriel Zamora, who was the real instigator of this particular string of beef has been widely criticized for his pettiness and hypocrisy, as well as his racist tweets that surfaced. However, his apology video is lengthy and seems to be sincere. He owns up to his mistakes, apologizing to his fans, to Jeffree Star, to the other beauty vloggers who got entangled in this drama, and for his ignorant, racist behavior online. Gabby Zamora’s channel views and subscribers continue to go up in the wake of the scandal and his apology. He has gained over 350,000 subscribers on YouTube.

Laura Lee’s apology has been the most talked-about and criticized. She posted a botched apology video in which she appears to be crying and sorrier for herself than to the people she offended or hurt. Many viewers doubt the sincerity of her incomplete apology and have pointed out that her on-camera crying seems contrived. Since the scandal, and the release of her apology video, Lee’s career has gone downhill. She has lost over 500,000 YouTube subscribers, and beauty brands have been dropping her products and partnerships. This drop in subscriber counts could equal an estimated loss of $65,000 per year. Since apologizing, Laura has been inactive on social media.

Although Jeffree Star stans did not dig up any racist tweets from Manny MUA, made an apology video addressing an encounter with a fan that went wrong, and another video directed mostly towards Zamora, in which he apologizes for the negativity that Gabby Zamora called Manny out for (in his apology video). Manny has lost over 300,000 YouTube subscribers in the month since the scandal.

Nikita Dragun has apologized in an Instagram story and on Twitter. Many consider this apology to be insincere and incomplete, especially because she at one point tried to claim that the tweets in question were fake. She has lost over 75,000 YouTube subscribers.

Meanwhile, Jeffree Star has been posting Snapchats, basically reveling in the downfall of people who have wronged him. His social media follower counts have been rising steadily since the Shane Dawson docuseries, gaining him almost 1 million more YouTube subs.

In the worlds of YouTube and online influencers, fame, popularity, and follower counts can dramatically affect a figure’s income. For top influencers, social media and YouTube can have a lucrative economy, and scandals like these reduce their clout and can be detrimental to the profitability of their brands.

Gabriel Zamora: I'm sorry if you were offended

This scandal in the beauty community has revealed a number of things about internet culture. For one, it seems that beloved stars will continue to be exposed as problematic favs. Especially in a section of the internet that thrives on drama, it is difficult, if not impossible to erase one’s past actions. Stan Twitter can be hostile. Although in this case, it seemed to be working towards anti-racism, extreme devotion to celebrities can also foster harmful cyberbullying and defamation.

With the rise of internet callout culture and the consensus that racism is bad, people will be held more accountable for their actions, especially when they are public figures and role models to young people.

Dramageddon shows how internet beef can be petty, but can also address larger issues like casual racism in a community. The ramifications of these beauty vloggers’ past actions is a sharp reminder that nothing online is temporary. Whether or not it is right, public and private online interactions can and will be documented and used against people. However, since some bloggers, including Gabby Zamora and Jeffree Star, have actually benefited from drama and the exposure of their racist comments. Forgiveness or lack thereof online remains somewhat sporadic and arbitrary.