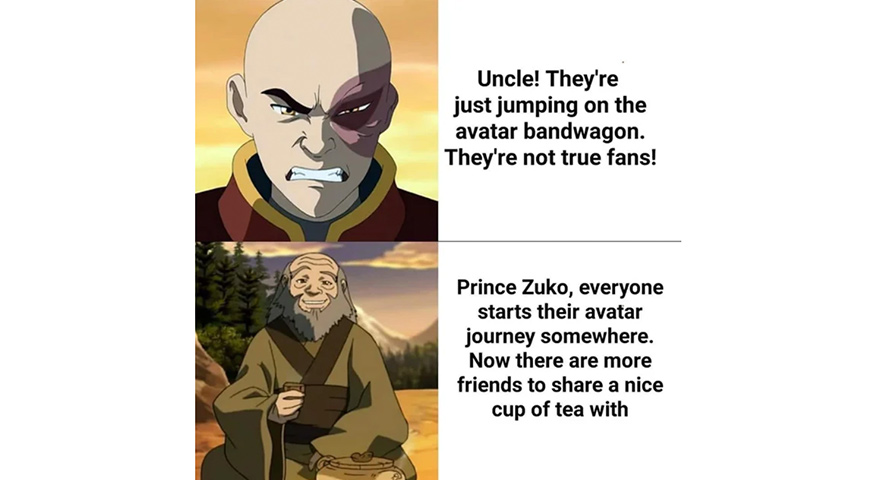 The Brief: Avatar: The Last Airbender memes have spiked in popularity since the 2005-2008 animated series started streaming on Netflix.

Avatar: The Last Airbender memes come from the animated series that has been beloved by fans since its original run on Nickelodeon from 2005-2008. Its arrival on Netflix has brought on a new surge of memes and commentary about the epic adventures of Aang and his companions.

ATLA is renowned for its world-building, comedy, character development, and portrayals of serious issues through a story that’s accessible to young people. Memes about Avatar: The Last Airbender are versatile and can be found on various social media platforms and online communities.

Many memes, like this “not the bayang” reference, deal with Aang’s iconic hairstyle which consists of a blue arrow on an otherwise bald head.

long ago, the four nations lived together in harmony

Airbnb suggests the existence of other bnbs. Waterbnb. Earthbnb. But that all changed when the firebnb attacked

The subreddit r/TheLastAirbender, which has over 740,000 members, is host to many ATLB image macros and memes.

when your ex’s girlfriend turns into the moon from TheLastAirbender

gatekeepers suck. been watching since it was airing but the more the merrier! 🍵❤️ from TheLastAirbender

TikTok is a major hub for Last Airbender memes where videos associated with the hashtag #Avatar have been viewed over 2.6 billion times.

Many Avatar fans have expressed disdain for the 2010 live-action film The Last Airbender, which is often a subject of ridicule in memes.

The blue people one wasn’t even first from TheLastAirbender

Next up: What Is A Bayang/Banyang?