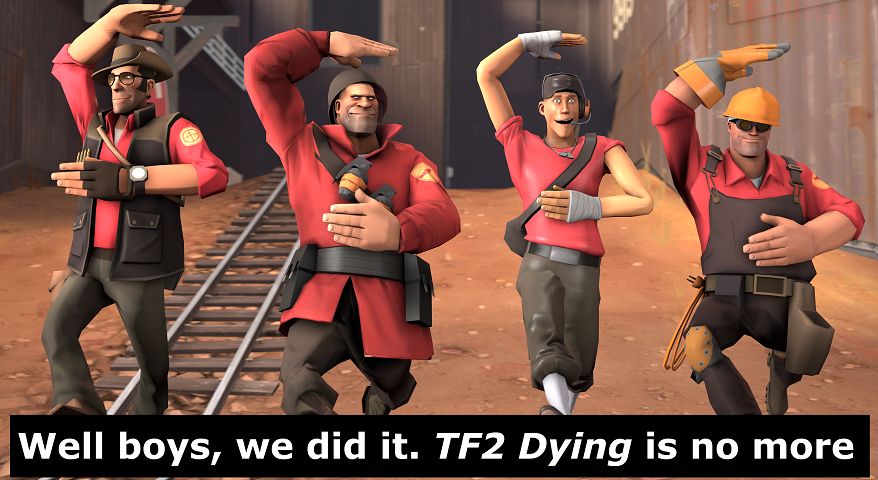 The Brief: Following the recent release of a YouTube video pitting Overwatch against Team Fortress 2, Redditors have been sharing their meme-ified versions of the various TF2 character classes.

Gamers and cosplayers are already well-familiarized with Team Fortress 2. This game, published by the Valve Corporation in 2007, is a team-based, multiplayer, first-person-shooter video game. The game is known for its cartoony graphics, offbeat humor and innuendo, and above all else, its wide variety of player classes.

Though the game took off over a decade ago, the Team Fortress 2, or TF2, community is still widely at large. Why the sudden surge of TF2 memes on Instagram and Dank Memes?  Last year, YouTuber The Winglet created a video pitting TF2 characters against those from Overwatch. Just weeks ago, The Winglet released a brand new sequel featuring new heroes and new jokes for gaming stans.

The video was published on June 24th and already has well over 4 million views.

In TF2, players on each team must choose a “class” to play, each with their own set of abilities and special weapons. There are nine character classes: Demoman, Engineer, Heavy, Medic, Pyro, Scout, Sniper, Soldier, and Spy.

Following the latest video from The Winglet, TF2 fans took to Reddit to share their meme-ified versions of the different character classes. While some classes proved more popular (or easier to drag) than others, all of them received proper homage.

In Team Fortress 2, the Engineer is capable of building teleporters, sentry guns, and dispensers that aid other teammates in battle.

Most Reddit memes featuring the Engineer often roast the character for fixing something that’s easily-fixable and/or drag him for not being able to take on a fix-it that again, is usually easily-fixable.

The spy has the power of disguising themselves as other members of the other team. They can also kill enemies with one hit if they manage to sneak behind them and stab them in the back (talk about literal “backstabbing”).

Memes featuring the Spy often ironically poke fun at people for their lack of subtlety or sneakiness.

The Medic just might be everyone’s new favorite Anti-Anti-Vax meme. This character’s title is very indicative of his powers. The Medic can heal fellow teammates with a Medigun that can ÜberCharged to make other players temporarily invulnerable.

we did it boys from dankmemes

More often than not, these memes are used to show someone (usually a healthcare professional or parent) trying to treat a medical issue and taking an L.

Meet the Karen from dankmemes

TF2 is a first-person shooter game, so it should come as no surprise that there’s a Sniper character. The Sniper can kill enemies from far away with his sniper rifle.

Many memes featuring the Sniper are used to roast someone’s “impeccable” accuracy at shooting/hitting something (or in the case of this Bowling Alley meme, someone).

The Demoman wields a grenade launcher and sticky bomb launcher that can be used to kill enemies around corners or lay traps for enemies to run into. Basically, the man knows his bombs.

Most memes featuring the Demoman show him literally and figuratively dropping bombs.

Why nobody use this meme? from dankmemes

Also known as just “Heavy”, the Heavy Weapons Guy may be the largest and slowest moving of the classes, but he comes equipped with a minigun and fists to kill. He can also recover his health by eating sandwiches.

Most memes featuring the Heavy roast his enormous size and shape.

They played themselves from dankmemes

The Scout has proved to be one of the less popular meme-ified TF2 characters.

In Team Fortress 2, the Scout is the fastest class in the game and unlike the other classes, is able to double jump. The Scout’s default weapons are a shotgun and baseball bat.

The Scout is the ultimate time traveler from tf2memes

The Pyro class, short for Pyromaniac, wears a gas mask and fireproof suit while wielding a flamethrower and fire axe. Memes utilizing the Pyro capitalize on his ability to set things (and once again, people) ablaze.

The Soldier comes ready to do damage with his rocket launcher. In addition to firepower, this dad bod brute is capable of reaching great heights by jumping while firing a rocket at the ground.

While the Soldier doesn’t seem to be as meme-worthy as his fellow compatriots, memes roasting the Soldier tend to feature his oversized helmet.

The meme’s probably dead, but I still wanted to make this awful remake. from tf2

The Team Fortress 2 boys are back in action!

The TF2 boys from tf2