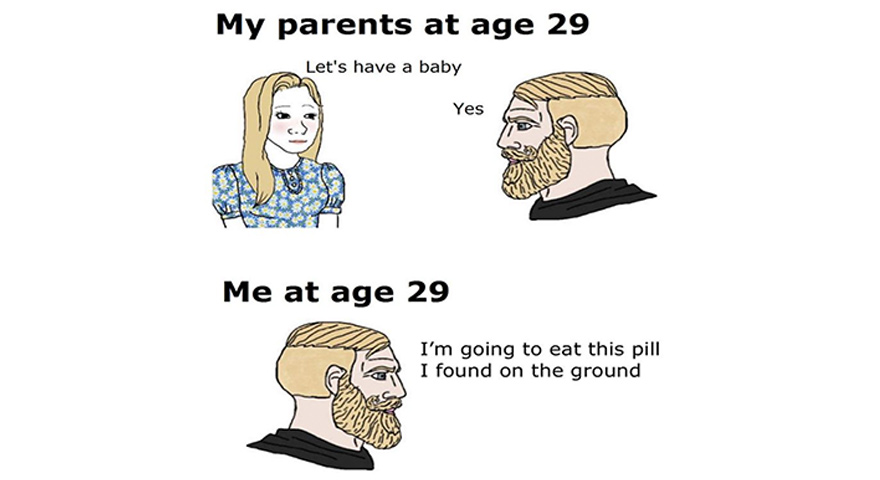 The Brief: Wojak cartoon memes of a guy standing alone in a corner at a party are having a resurgence in 2020.

Memes use a drawing of a Wojak/Feels Guy character standing by himself in a corner at a party to highlight the kinds of things people think to themselves when they’re alone in a crowd. These memes first started circulating online in 2014 on Tumblr, 4chan, and Reddit to represent people who wish they’re somewhere else.

Variations of this format edited the characters to depict different stereotypes and show how they wish they were at home “playing video games,” “on Tumblr,” or doing their other favorite activities. The sad tone of these memes highlights the feeling that many people have when they’re physically close to others, but emotionally and mentally alone.

In late November 2020, this format had a resurgence on Twitter and Instagram where the Wojak/Feels Guy character is thinking about something that his fellow party-goers aren’t aware of. In many cases, he’s saying “they don’t know I…”

Wojak at a party memes often reference people who are popular in internet communities in ways that their IRL friends aren’t aware of.

A literary reference to Edgar Allan Poe’s “The Tell-Tale Heart:”

they don’t know i was considered gifted in elementary pic.twitter.com/P2HhQQwTSS

Next up: 'Look who decided to come out of their room' Family Dinner Memes