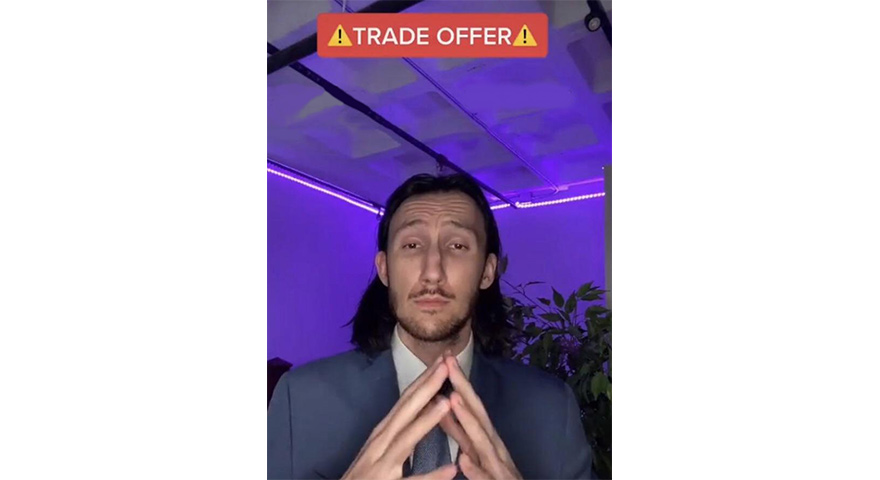 The Brief: "Trade offer" memes, which originated on TikTok before spreading to Reddit and other platforms, present possible exchanges.

According to Know Your Meme, “trade offer” TikToks first appeared in November 2020 in a video by @natebellamy4 that made a “Trade proposal to God” set to the music played during the 2020 NBA draft. This video suggested that “Kamala Harris, Cardi B, and California” be traded for “Ronald Reagan, Kobe & Gigi, and Covid vaccine.” In the video, the creator poses behind a music stand, dressed in a suit, and in front of an image of an NBA draft press conference.

This style of video took off on TikTok in March 2021 as users started sharing their own “trade offers” and” trade proposals to God,” presenting a column of things they’d like to get rid of and a column of what they’d like to gain in return. At the time of writing, there are over 18,000 videos set to the “NBA Draft Jingle” on TikTok and videos associated with the hashtags #TradeProposal and #TradeOffer have been viewed over 3.5 million times.

One video in particular, by user @bradeazy, took off, inspiring a number of spinoff memes. The original video, which has been removed from TikTok but is featured on @bradeazy’s Instagram account, proposes a “trade offer” where he receives “sloppy toppy” (oral sex) in exchange for “nothing.”

The image of this suit-clad creator pressing his fingertips together has become an image macro meme format popular on Reddit where people share possible trades, many of which appear unequal.

The real MVP from dankmemes

Do you wish to proceed? from dankmemes

These memes are so popular on certain meme subreddits that people are making memes about their over-saturation:

Batman is based. from dankmemes