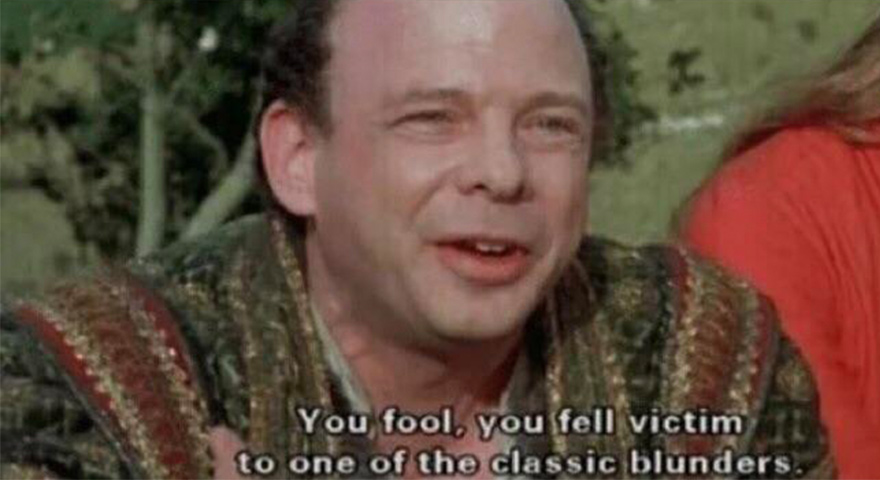 The Princess Bride “You Fool” Memes

"You fool, you fell victim to one of the classic blunders" is the punchline to an image macro meme from the film The Princess Bride.

This meme takes an image from the 1987 cult-classic The Princess Bride. In this scene, the character Vizzini, played by Wallace Shawn, makes fun of Westly, who he believes he just tricked into drinking poison.

“You fool! You fell victim to one of the classic blunders, the most famous of which is ‘Never get involved in a land war in Asia,’ but only slightly less well known is this: ‘Never go in against a Sicilian, when death is on the line!'”

Immediately after uttering these lines, Vizzini laughs manically and then drops dead. His unwarrented smugness in this scene and throughout the film is captured in these Princess Bride memes.

Many variations of this meme share an elementary school style joke followed by Vizzini’s lines to convey how such joke tellers typically act after fooling their friend or classmate.

That’s not how you spell “it”!

Vizzini is the subject of other memes, including ones that reference his much-quoted line “inconceivable!” and the character Inigo Montoya’s response “you keep using that word. I do not think it means what you think it means.”

Next up: The Best Game of Thrones Bran Memes