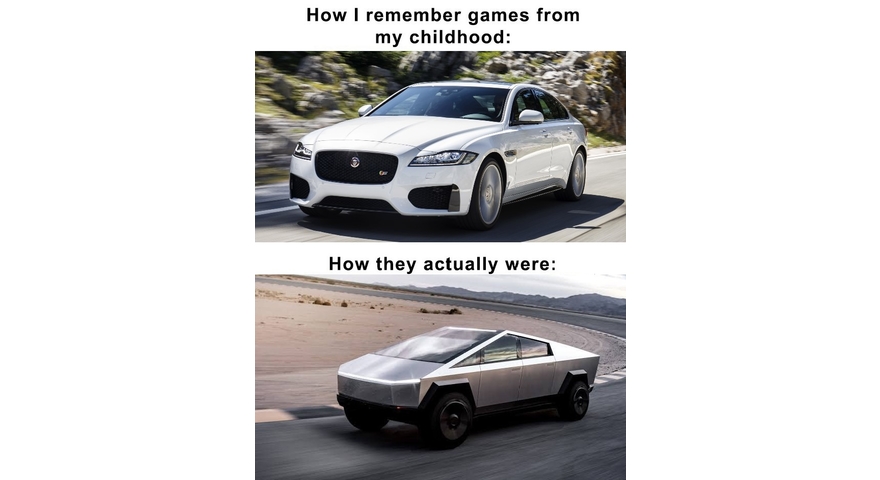 The Brief: Elon Musk has unveiled the new Tesla Cybertruck, setting the meme world ablaze thanks to its minimalistic design.

Meme wizards were quick to point out that the low poly design reminded them of older games with outdated graphics:

So much sexier from dankmemes

What can I say from dankmemes

It really REALLY do be like that from dankmemes

I see you, Elon. from dankmemes

Nostalgia is a hell of a drug from memes

The car looks familiar from dankmemes

my pc sucks from dankmemes

You were saying? from memes

Other Tesla truck memes speculated about how the Cybertruck was designed, with this one referencing Elon’s epic interview with Joe Rogan:

How it was designed from memes

THIS IS INNOVATION from dankmemes

An I am speed meme featuring the Tesla Cybertruck:

Hope you have big trunk, because im gonna put my bike in it. from dankmemes

Few CEO’s are as in touch with meme culture as Elon Musk, who recently donated $1 million to #TeamTrees, has asked to host PewDiePie’s meme review segment, and even took to Twitter to find the dankest of memes. The meme lords over at the subreddit r/dankmemes suspect that Elon might be trolling the world with this truck design.

He knows what he did from dankmemes

we know you did Elon from memes

Some people think the design is fire, while others are clowning the Cybertruck for its extreme minimalism:

I would buy one from memes

thanks, Elon! from memes

Reality is often disappointing from dankmemes

Gonna tell my kids this was memes featuring the Tesla Cybertruck:

Gonna tell the kids this was the Tesla Cybertruck pic.twitter.com/OKyW7pKNgM

It’s always one of the three from memes

Me waking up to reddit this morning from memes

Hello it’s us from dankmemes

What just happened? from memes