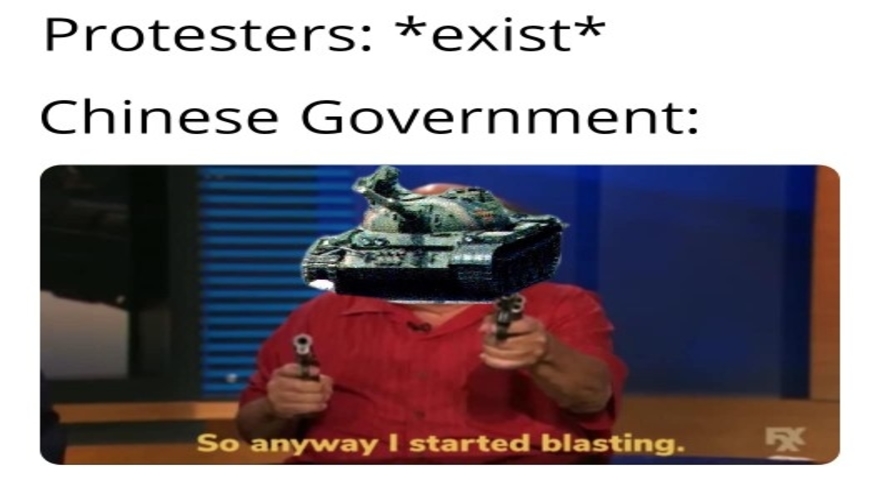 So Anyway, I Started Blasting Memes

The Brief: This meme comes from an episode of the show Its Always Sunny In Philadelphia, in which character Frank Reynolds appears on a local TV station arguing in favor of gun ownership. While describing a situation in which three men attempted to mug him, he pulls out two guns and exclaims, "Anyway, I started blasting."

Its Always Sunny In Philadelphia is a popular comedy show starring Danny DeVito, who plays gun aficionado Frank Reynolds. First aired in September of 2013, the meme-ified episode titled “Gun Fever Too: Still Hot” features an opening scene in which Frank tells the story of him fighting off an attempted mugging on local news. As he recounts the story and in between bites of a sandwich, Frank pulls out his “pieces” and proclaims, “Anyway, I started blasting,” while pretending to shoot frantically into the distance.

In September 2019, a captioned still of the scene, adapted to “So anyway, I started blasting,” became a popular reaction on Reddit in various politically charged memes.

This format really lends itself well to conspiracy theories from IASIP

oh no please from memes

Suicide is badass! from memes

The format also gained significant traction on the subreddit r/HistoryMemes, where it was used to illustrate violent events of the past, or in the case of the Chinese government, also to criticize their current reaction to the protests in Hong Kong.

Not that it actually happened or anything… Hahaha… from HistoryMemes

What fun is a new meme format if it’s not dunking on boomers?

Next up: Check Your Vibes With These 'Vibe Check' Memes

Check Your Vibes With These 'Vibe Check' Memes