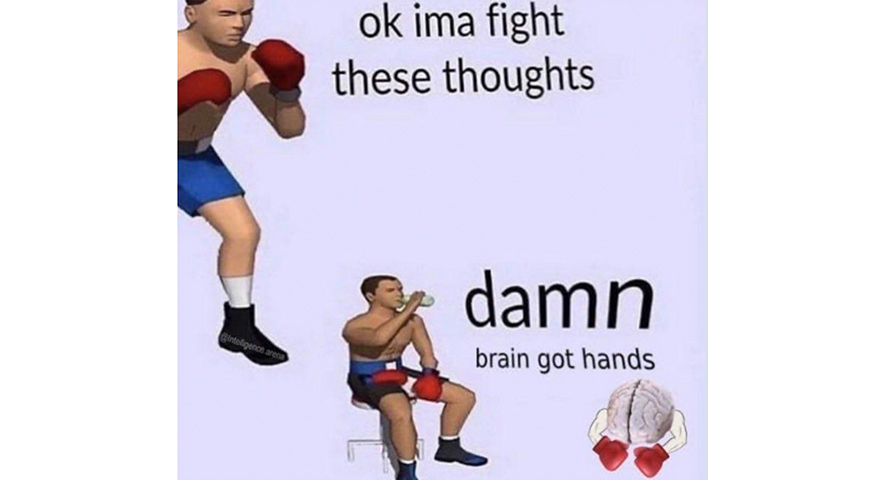 The Brief: Popular on several social media platforms, "ok ima fight these/damn these got hands" memes showcase scenarios where people are surprised by how challenging something is.

Image macro memes featuring animations of a boxer with his hands up and then drinking water started appearing on social media in September 2020. They were originally paired with variations of the text “ok ima fight these thoughts” followed by “damn this hard” or “damn brain got hands.”

These memes, which can be found on Twitter, Tumblr, Instagram, Reddit, and Facebook, use the boxer to represent someone trying to fight something in their lives or in society. Typically, the subjects of these memes find that their opponent is stronger than they had anticipated.

In December 2020, TikTok user @parkertozier created a sound from a boxer drinking water image macro meme, saying “ok ima fight these gender norms,” followed by “damn, these gender norms got hands!” Their sound has since been used in over 21,000 TikToks where people illustrate the obstacles they face while challenging traditional gender roles.

LMAO it wasn’t its own sound now it is, cred to @parkertozier 4 the hilarious gender norms sound! pls use this as you wish, I’m expecting iPhone jokes

♬ fighting capitalism but it got hands – commie bimbo

♬ fighting capitalism but it got hands – commie bimbo

Next up: New Year's Resolution 2021 Memes