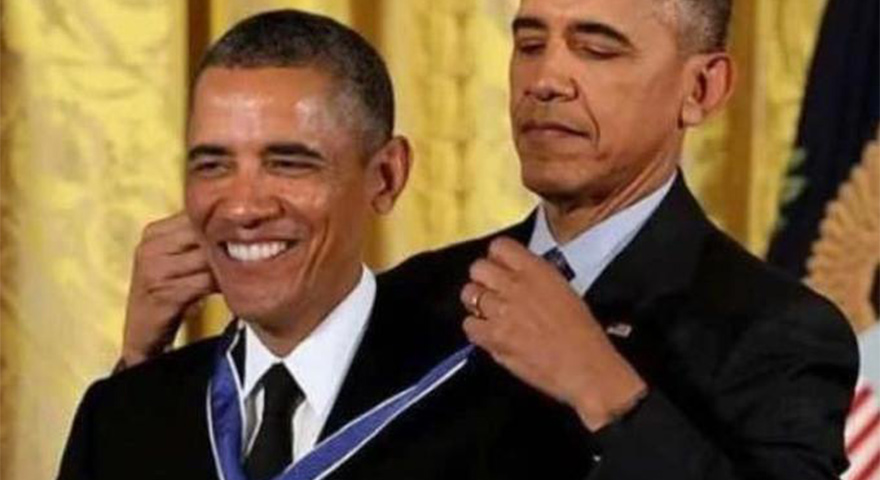 Obama Giving Himself A Medal Memes

The Brief: This meme format uses a photoshopped image of former President Barack Obama giving himself a medal to make jokes about extreme instances of people "patting themselves on the back."

The image for these Obama medal memes was photoshopped from a picture of then-President Obama awarding Bruce Springsteen with a Presidential Medal of Freedom. After someone photoshopped Obama’s face onto Springsteen’s body, this meme became popular across the web and on Reddit in particular as a representation of someone going out of their way to applaud themselves.

The Obama giving himself a medal image macro meme format has two main versions: one in which Obama appears to be crying as he is awarded the medal and another in which he is smiling. In some instances, this meme has been used to criticize President Obama specifically. More broadly, the image can be applied to crack jokes about someone being so proud of themselves that they would give themself a medal. Examples of such behavior include retweeting your own tweets, laughing at your own jokes, or a company advertising itself on its own website.  In addition to being about self-aggrandizement, Obama medal memes can be a more wholesome depiction of self-love.

Although this image is obviously photoshopped, the concept of someone proudly giving themselves a medal is an accurate metaphor for a common egotistical human behavior.

America on the 4th of July:

How Australians see america on july the 4th: from dankmemes

Oof ouch my medal of honor from bonehurtingjuice

gEt SpOtIfY PrEmIuM! from dankmemes

Most Netflix movies aren’t that good. from memes

Next up: Floating Guy/Running Guy Memes