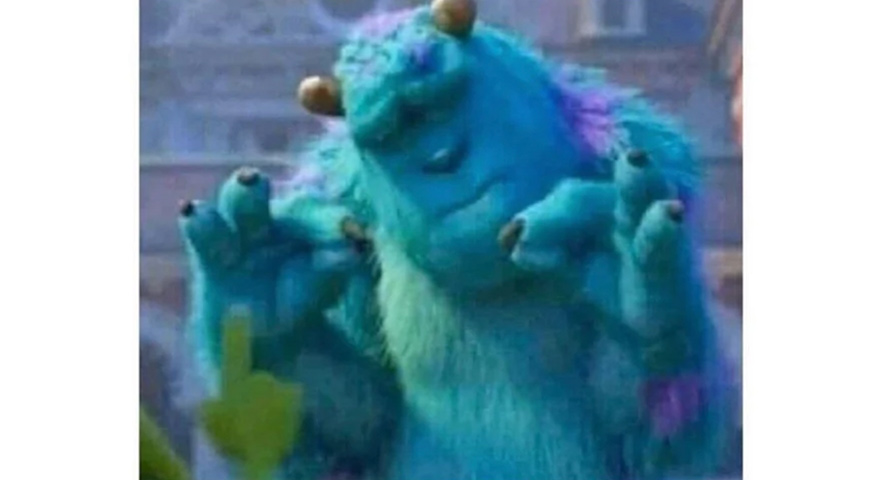 The Brief: Sully from Monsters, Inc. has appeared in another meme, this one where he is pinching his fingers and looking content as if he has just tasted delicious food.

The 2001 film Monsters, Inc. and its sequel Monsters University have been proven to be meme gold mines (see stoic face, Mike explaining, and baby Mike memes). The latest image macro meme format to come out of this series is the Sully pinch meme.

These memes consist of an image of the large, blue, and fuzzy character Sully (James P. Sullivan) pinching his fingers together with an expression of apparent bliss on his face. Variations of these memes show Sully as a gourmand, as pinching various objects, tasting something yummy or giving out his stamp of approval. Creative Photoshop additions add items to Sully’s hands for an extra twist.

Sully approving/pinching/tasting/chef’s kiss/ok sign memes are reminiscent of Gordon Ramsay “finally some delicious f**king food” memes and this meme of Pacha from The Emporer’s New Groove.

Is Sully the new Salt Bae?

You have to feel it from dankmemes

Only oc around here from dankmemes

A two-panel variation on the Sully pinch/taste format works as a replacement for the Drake yes/no meme and other similar ones such as Kowalski big brain, Kombucha girl, and Robbie Rotten memes.

Can I have the Ron Burgundy Egg & Cheese on a Croissant? from memes

Every god damn time from memes

Of course, comparisons and hybrids have been made between this new format and other popular Monsters, Inc. memes.

There’s a new king in town from dankmemes

Next up: What Is A Goomer?