I Am Once Again Asking Memes – Viral Bernie Sanders Format The Brief: The "Bernie or Hillary" memes of 2016 have been reimagined for 2020 with multi-candidate "meet the Democratic nominees" memes, also known as "compare them on the issues that matter" memes.

Variations of “meet the Democratic nominees” memes take two or more presidential candidates and “compare them on the issues that matter.” Often, these memes compare candidates’ supposed stances on issues that have little or nothing to do with politics. This image macro format is designed to look like an informational flyer, but actually just gives comedic suggestions about what candidates’ views would be on random topics, often skewed to make certain candidate(s) look better than others.

The 2020 version of these presidential candidate comparison memes is a deviation of “Bernie or Hillary” memes from the 2016 election.

Merry Christmas, have a meme from SandersForPresident

Bernie or Biden? compare them on the issues that matter. from PinkFloydCircleJerk

Bernie or Biden on the issues from JoeBiden

Compare Them On The Issues That Matter Templates

Depending on the results on and after Super Tuesday, different templates may be more relevant than others.

The current frontrunner vs. the Republican incumbent:

Bernie or Trump? [Template] from PresidentialRaceMeme 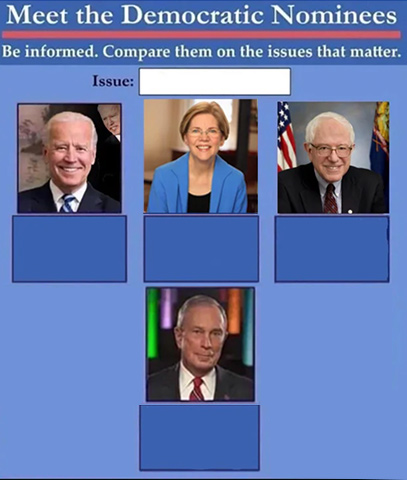 Next up: Hi Adolf Memes From Jojo Rabit