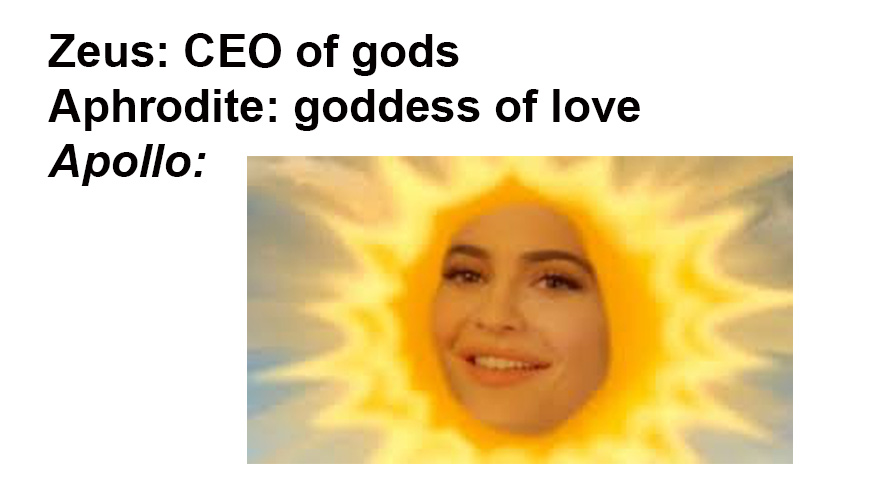 Seemingly overnight, Greek gods memes have gone viral on Reddit, inspiring a number of image macro memes about different traits of the most well-known Greek gods and goddesses. Particular popular on the Dank memes subreddit, these memes poke fun at stereotypes about Greek gods, portraying them through contemporary images.

The sudden influx of Greek mythology memes to Reddit did not go unnoticed. These memes note just how suddenly this topic took over the site’s top meme pages.

Zeus: Basically the CEO of Gods from dankmemes

Seriously, where did this all come from from dankmemes

Zeus: CEO of the Gods

These memes often refer to Zeus, the god of gods as the “CEO of gods.” His notorious philandering is illustrated in this distracted boyfriend meme.

Poseidon: God of the Sea

Poseidon memes depict the god of the sea, earthquakes, and storms as Filthy Frank, and a human water balloon.

The gods are among us from memes

Hades: God of the Underworld

It’s hard to be as metal as Hades or this cat.

God of the dead from memes

Of course, the god of wine, festivity, pleasure, and frenzy is depicted as an avid partier.

God of wine from dankmemes

Hercules is known for his epic story, Twelve Labors, and drawn-out death.

Unsurprisingly, some Redditors sees Belle Delphine as the goddess of love, beauty, pleasure, passion, and procreation.

goddess of fertility from dankmemes

Apollo: God of the Sun

Greek god memes are a thing now from memes

ah my amazon package from dankmemes

This Greek god meme won’t let you forget about the god of fire, metalworking, masonry, and sculpture!

Behold, the God of unionization from HistoryMemes

Next up: Big Backpack Memes