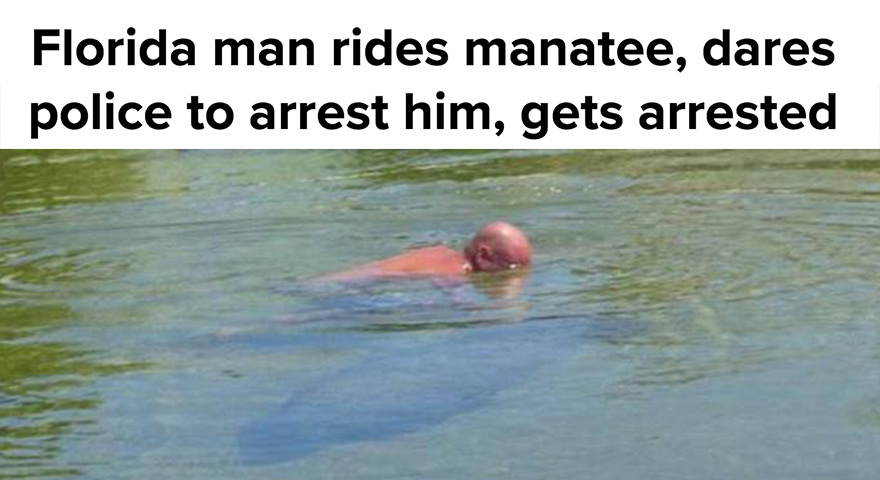 The Brief: A prompt to Google "Florida man" + your birthday has led to an influx of hilarious personalized memes.

Not into horoscopes? The latest internet challenge asks you to Google your birthday and “Florida man” to see what outrageous story from the Sunshine State falls on your birthday. The joke at the center of this is that there is at least one outrageous Florida man headline for every day of the year. Shenanigans have elicited headlines such as “Florida Man Slapped With Big Mouth Billy Bass Singing Fish After Argument” and “Florida Man Arrested For Practicing Karate By Kicking Swans In The Head.”Be warned: many of these headlines are hilarious, while others are darker and involve serious crimes.

This challenge was started by user Gandalfsoda on Tumblr and popularized on Twitter by @g_pratimaaa.

Celebrities like John Legend have jumped in on the trend:

This meme is similar to a recent popular one which prompted people to Google “Rihanna” + your birthday, thus finding a semi-personalized image of Rihanna serving looks.

The range of hilarious, terrible, and outlandish things that men in Florida have been arrested for have made headlines and memes for years now. A subreddit dedicated to the sharing of such headlines has over 440,000 subscribers. The term “Florida Man” has become widely associated with these headlines.

“Florida Man” inspired this parody from The Daily Show:

Next up: The StayHipp Drug and Drinking Slang Guide