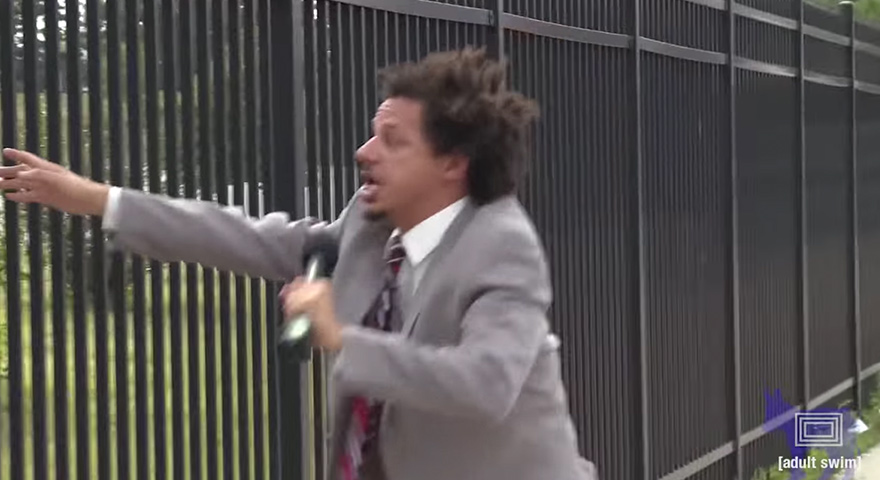 Let Me In Eric Andre Memes The Brief: Memes of Eric Andre kissing a cop in a comedy skit for The Eric Andre Show have been circulating as commentary in the wake of mass protests against police violence.

As protests against police brutality and the police killing of George Floyd erupt across the country and around the world, memes of Eric Andre kissing a cop are having a moment. These image macro memes use a photo from a clip in The Eric Andre Show where Eric Andre’s character is handcuffed by and then passionately makes out with a police officer played by James Adomian.

Eric Andre kissing a cop memes are being used to call people out for supporting law enforcement during a time where the violence enacted by the police has heightened visibility.

if ur still silent at this point imma just assume ur at home doing this pic.twitter.com/s2YgtDyGU7

Eric Andre who has participated in recent Black Lives Matter protests reposted a version of the meme created by @alima_lee on his Instagram where Andre is labeled as “Garcetti” and the cop is labeled as “LAPD.” This references LA Mayor Eric Garcetti’s support of the police department which includes a proposed budget that allocates 51% of its total to the LAPD.

The seriousness and tragedy of recent events have caused a slowing in the spread of lighthearted memes, but this format combines humor with serious commentary, making it a popular way to spread ideas and opinions online.

Use this template to create your own version of Eric Andre kissing a cop memes.

Next up: Meet Teen TikTok Activist Jackie James AKA Fatraco0n