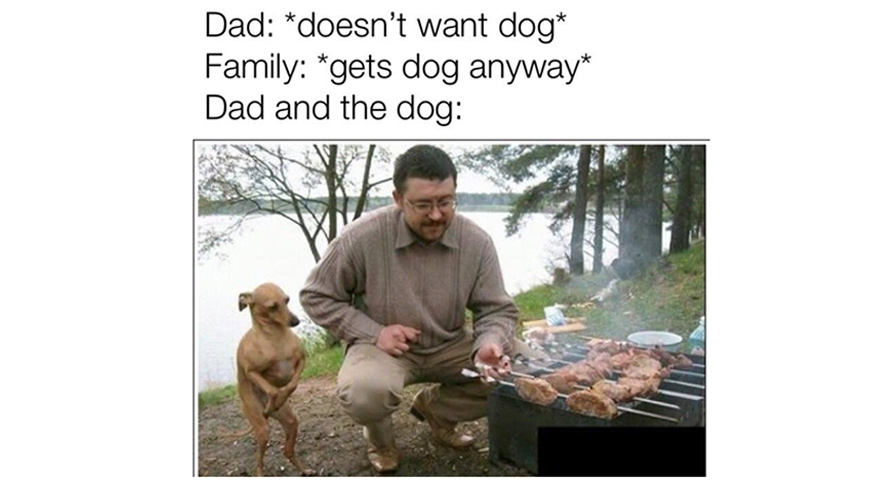 The Brief: Dad and the dog memes tell the story of dads who said they don't want a dog but end up falling in love with the dog their family adopts.

It’s a story that’s been told before. A family wants to adopt a dog. The dad is aginst it. The family adopts the dog anyways. Soon thereafter, the dad and the dog become best friends.

This potentially relatable story is the basis of a wholesome meme about the love that can only exist between a dog and a dad who once claimed he didn’t want said dog.

“Dad and the dog” memes are popular across social media platforms. Many of them feature a play-by-play of a series of events that looks like this:

This is followed by an image of a dad and his family’s dog bonding. Oftentimes, the dad goes out of his way to care for the dog, even after previously asserting that he didn’t want to be burdened with such a responsibility.

On Twitter, dad and the dog memes often feature real dads with their actual dogs.

My dad now: literally blow drying the dog since my house is cold and he just got out of the pool pic.twitter.com/t3ozeMMr90

Went hiking with my dad and his dog and took approximately 500 pics of the dog swimming. pic.twitter.com/QttuL3FVjB

No purer love than that of a Dad and the dog he didn’t want♥️ pic.twitter.com/iN2LoRgsEN

In the typical Reddit meme fashion, versions of this meme that are popular on Reddit use image macros to depict funny representations of dads and dogs.

"you have to feed it and walk it" from dankmemes

Mr. Wick is a cool dad from dankmemes

“It’s up to you” from memes

Spaceballs, The Dog/Dad meme! from memes

Dad’s and dogs right from memes

I guess this is a meme now from memes

In TikTok videos, people act out how friendship forms between a reluctant dad and his dog.