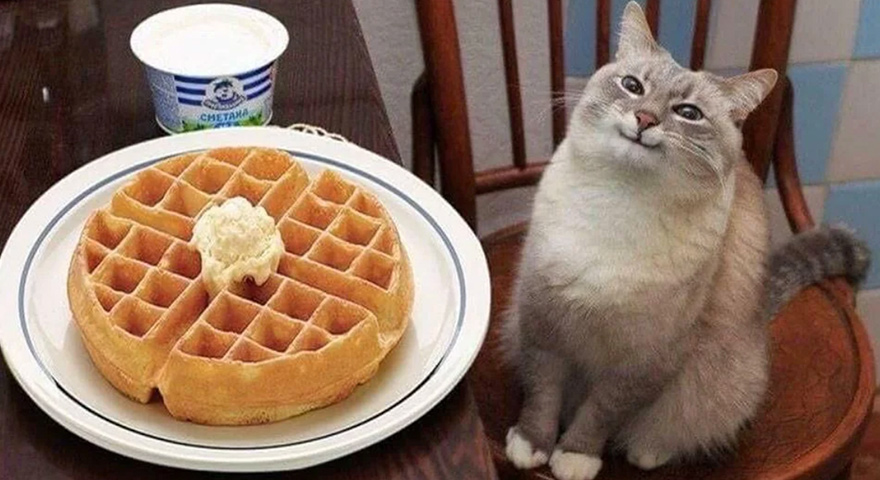 Cat Sitting Next To Waffles/Pancakes/Blini Memes

The Brief: A photo of a cat sitting next to a plate of blini, pancakes, or waffles with a distinct expression on its face has become a popular meme format.

The subject of these cat sitting next to waffles/pancakes/blini memes is a Russian cat who can be found on Instagram @cat.jazz. Often referred to as “Blini Cat,” Jazz became famous after a photo of him sitting next to a plate of Blini, a type Russian and Ukranian pancakes went viral. In this photograph, Blini Cat’s expression is distinct as he looks at the camera with his bright blue eyes.

Jazz’s facial expression inspired a popular YouTube video in which a narrator describes a debate he had with a friend about what emotion the cat’s face portrays. The original video, which is in Russian muses about how the cat’s face could be a grimace or a grin, representing a feeling of superiority or a plea to be granted access to the blini. This wholesome video ends with:

“Beautiful cat. Beautiful picture. And it does have this… atmosphere of warmness… Feeling of home comfort. Because everything here feels so alive. See? Those blins. Freshly hot prepared blins. And there’s such a great cat. This is the dream of any person. Who of us wouldn’t like to have a plate full of blins and a cat nearby? I have neither. Which is why when I look at this picture, I’m quite satisfied.”

The cat’s multi-faceted expression and the simultaneous smugness and warmness presented in the picture has made it into a popular meme. Some fans of Jazz have created their own artistic interpretations of the photo, and one person even had the image tattooed on their skin.

Blini Cat lends itself well to object-labeling image macro memes. On Reddit, a photoshopped version of this image with waffles added instead of blini and a curved smile on the cat’s face has been circulating via memes.

Based on a true story from memes

Just keep it in… from memes

this actually happened from dankmemes

Hi! How did you learn about me? Write in comments 😻 Привет! Как ты узнал обо мне, напиши😼 #catjazz #blini #cat

I now have a separate folder in my drive for blini cat pic.twitter.com/pYVMbdNX5Z