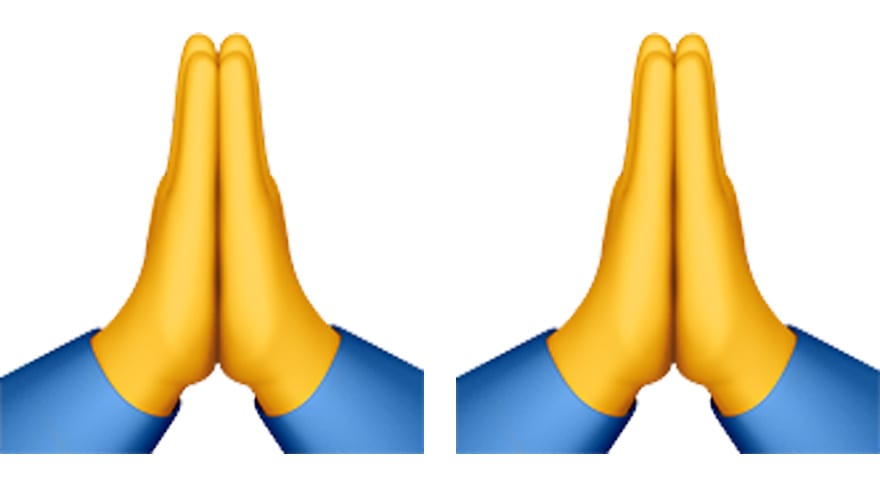 The Brief: Does the hands pressed together emoji 🙏represent a high-five, prayer hands, or something else entirely?

What Does 🙏 Emoji Mean?

This emoji 🙏, which is formally called “person with folded hands emoji,” has sparked much debate as to what exactly it represents. Many people insist that it represents hands praying, while others argue that it is a high five. It can also mean “thank you,” “Namaste,” or “please.” The emoji itself has varied in its exact illustration, with previous versions depicting thumbs and rays of light stemming from the hands.

Differences in usage can stem from people’s personal interpretation, as well as from the significance of this symbol in various cultures. Emojis originated in Japan, where hands held together can mean “thank you.” In Hindu culture, hands pressed together associated with the “Namaste,” greeting. which means “I bow to the divine in you.”

Although there’s nothing wrong with using this emoji as a high-five, most evidence points to the hands being held together, as if they are in prayer. Both of the hands have the same colored sleeves and are facing in the same direction. This suggests that the hands belong to one person rather than two separate people, meaning that it’s not a high-five, but a “prayer hands” formation.

The debate and confusion around this emoji highlight the nuances of language in both writing and symbols. As with anything else, it’s important to consider the context in relation to how this emoji is used. And, if things get really confusing, it’s usually ok to just ask.